Clash of Empires in South China: The Allied Nations' Proxy War with Japan, 1935 1941 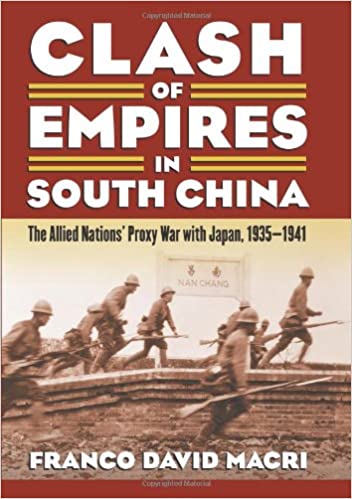 Japan's invasion of China in 1937 saw most major campaigns north of the Yangtze River, where Chinese industry was concentrated. The southern theatre proved a more difficult challenge for Japan because of its enormous size, diverse terrain, and poor infrastructure, but Generalissimo Chiang Kai-shek made a formidable stand that produced a veritable quagmire for a superior opponent-a stalemate much desired by the Allied nations.<br><br>In the first book to cover this southern theatre in detail, David Macri closely examines strategic decisions, campaigns, and operations and shows how they affected Allied grand strategy. Drawing on documents of U.S. and British officials, he reveals for the first time how the Sino-Japanese War served as a "proxy war" for the Allies: by keeping Japan's military resources focused on southern China, they hoped to keep the enemy bogged down in a war of attrition that would prevent them from breaching British and Soviet territory.<br><br>While the most immediate concern was preserving Siberia and its vast resources from invasion, Macri identifies Hong Kong as the keystone in that proxy war-vital in sustaining Chinese resistance against Japan as it provided the logistical interface between the outside world and battles in Hunan and Kwangtung provinces; a situation that emerged because of its vital rail connection to the city of Changsha. He describes the development of Anglo-Japanese low-intensity conflict at Hong Kong; he then explains the geopolitical significance of Hong Kong and southern China for the period following the German invasion of the Soviet Union.<br><br>Opening a new window on this rarely studied theatre, Macri underscores China's symbolic importance for the Allies, depicting them as unequal partners who fought the Japanese for entirely different reasons-China for restoration of its national sovereignty, the Allies to keep the Japanese preoccupied. And by aiding China's wartime efforts, the Allies further hoped to undermine Japanese propaganda designed to expel Western powers from its Greater East Asia Co-Prosperity Sphere.<br><br>As Macri shows, Hong Kong was not just a sleepy British Colonial outpost on the fringes of the empire but an essential logistical component of the war, and to fully understand broader events Hong Kong must be viewed together with southern China as a single military zone. His account of that forgotten fight is a pioneering work that provides new insight into the origins of the Pacific War.
DOWNLOAD
(Buy premium account for maximum speed and resuming ability)

Comments
No comments for "Clash of Empires in South China: The Allied Nations' Proxy War with Japan, 1935 1941".
Add Your Comments
Please Login to comment