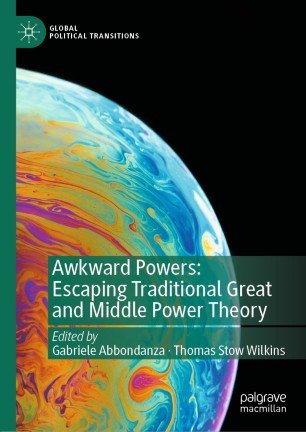 'Awkward Powers' is an innovative and impressive book written by leading scholars in the field. It assists with our understanding of the changing nature and role of middle powers at a time of considerable upheaval in the international system.
- Dr. David Walton, Western Sydney University, Australia

This wonderfully provocative collection of essays is a welcome contribution to an International Relations discipline still obsessed with big powers. It highlights how smaller states are now variously intervening in regional and global affairs. The book confirms that their "awkwardness" can no longer be ignored.
- Dr. Allan Patience, The University of Melbourne, Australia

This book introduces the editors' new concept of "Awkward Powers". By undertaking a critical re-examination of the state of International Relations theorising on the changing nature of the global power hierarchy, it draws attention to a number of countries that fit awkwardly into existing but outdated categories such as "great power" and "middle power". It argues that conceptual categories pertaining to the apex of the international hierarchy have become increasingly unsatisfactory, and that new approaches focusing on such "Awkward Powers" can both rectify shortcomings on power theorising whilst shining a much-needed theoretical spotlight on significant but understudied states. The book's contributors examine a broad range of empirical case studies, including both established and rising powers across a global scale to illustrate our conceptual claims. Through such a novel process, we argue that a better appreciation of the de facto international power hierarchy in the 21st century can be achieved.

Gabriele Abbondanza, PhD, is a Visiting Fellow at the Department of Government and International Relations, University of Sydney. He specialises in Australian and Italian foreign and security policy; national power, and regional, middle, and great power theory.